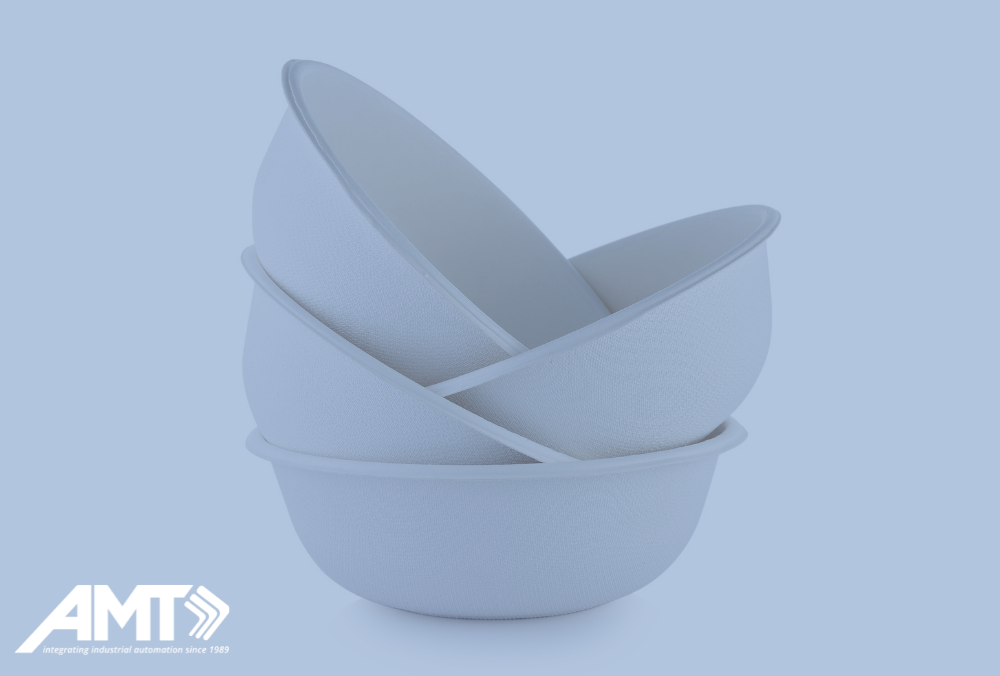 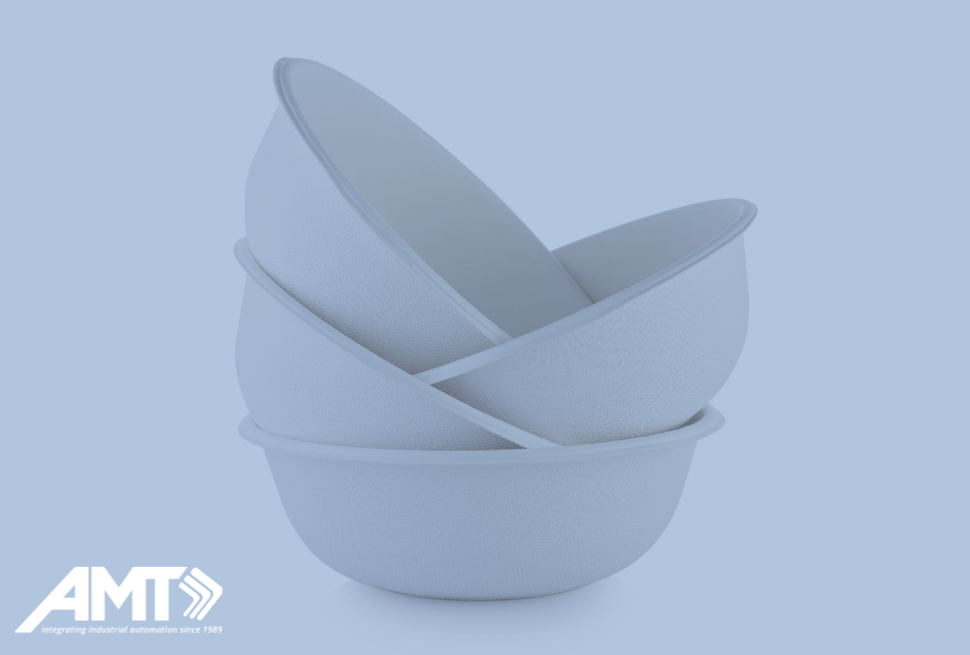 Applied Manufacturing Technologies partners with client to overcome major challenges when installing and adding safety protocols to overseas manufacturing equipment and reprogramming stand-alone systems to work together in a robotic production cell. The diverse skillset of AMT’s controls engineers allowed the company to support both automation equipment and process engineering challenges at this greenfield facility. 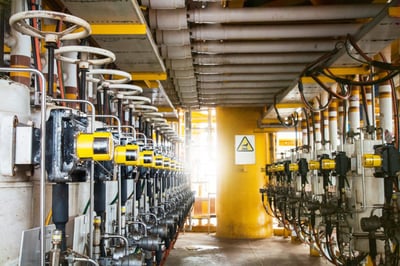 carriers for the fast-food restaurant industry. The company is opening a new facility and ordered hundreds of pieces of robotic equipment from an overseas machine builder pre-pandemic. Due to the 2020 COVID-19 travel restrictions, the OEM was unable to travel to the U.S. for installation and debugging. The client reached out to Applied Manufacturing Technologies to be their US-based partner to support the successful launch of the facility.
When AMT engineers got involved with the project, several concerns quickly became apparent. The original company that sold the equipment had subcontracted the job out to a number of smaller manufacturers, and several key specifications and requirements had been lost along the way.

The plant makes thicker-style disposable paper bowls and beverage trays for fast food restaurants using automated robotic cells. Currently there are four cells in the plant, and dozens more are on order. Each cell has two robots and a hot press between them. At the beginning of the process, there is a repulping area, which chops up recycled paper and adds water to make paste, called paper slurry. The slurry is pumped from the repulp area through the facility to the production equipment.

The delivery area is where the pulp is further diluted to reduce consistency ahead of being injected into the forming equipment. The final area in the production process is the robotic cell, where the product is made in a cell containing two robots. The first robot is on the “wet” side of the cell, handling the fresh slurry coming from the delivery system and injecting it into the forming drum. The robot then moves the wet product, now formed into the shape of a bowl, to a hot press. The second robot, on the “dry” side of the cell, removes the bowl from the hot press and moves it to auxiliary equipment which trims the excess. The product then passes through a vision system for a quality check before moving down a conveyor system to a robotic stacker in preparation for warehousing and shipment.

The original equipment vendor subcontracted out various pieces of 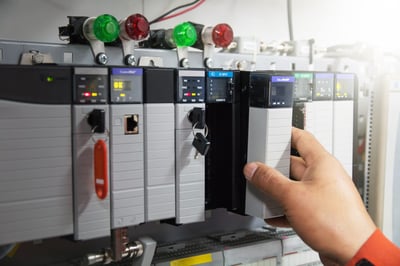 equipment to smaller manufacturers, and many of the original specifications were either lost or overlooked. The equipment that arrived at the plant from overseas had a variety of different control systems, multiple industrial electronic manufacturers, and was not designed or equipped to work together. If that wasn’t a big enough problem, the machinery also did not have the required safety functionality, and there was no easy way to add it.
AMT’s initial scope of work was to design the cabinets and low-voltage electrical panels, the brains of the equipment, in the robotic cell area as well as cabinets located in the delivery and repulping areas of the plant. Once that work was complete, AMT wrote much of the software for the machines.

Unlike a production line manufactured at a single OEM and communicating through a single control system, all the individual auxiliary equipment came from separate manufacturers, each having its own PLC. The hot press, forming drum, vision system, metal detection, exit conveyor, and even the trim robot: every component had its own PLC and they did not talk to each other or work together in any way.

For example, the four primary pieces of equipment to make a paper bowl are the forming drum, the hot press, and two robots. The forming drum is a device rotates and comes up through the floor of the robot system on the “wet” side of the cell. This is what presents the slurry to the robot in a wet-formed bowl that gets picked up and then put into the hot press. The hot press sits between the two robots in the cell and it presses down onto the bowls and bakes them. These two critical components that must operate synchronously are each on their own PLC and were unable to communicate to either of the robots when they arrived from overseas.

Aside from the equipment each having its own PLC, an additional complicating factor was that the control systems were not all from the same manufacturer or the same era of technology. For example, the Allen Bradley PLCs that needed to be tied together ran the gamut from the old MicroLogix1400 PLC on one system to a CompactLogix on another and the new Micro850 on yet another system. To top it off, Applied Manufacturing Technologies provided a brand new CompactGaurd Logix Safety PLC in the main panel. In addition to the variety of Rockwell Automation PLCs, the equipment was paired with a mixture of alternate OEM drives and servo controls, further complicating the communication setup. 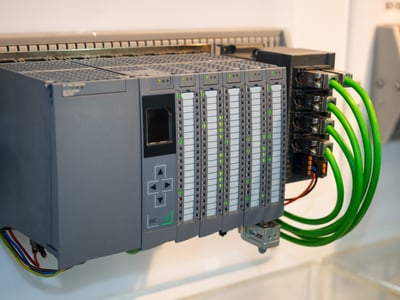 The wide variety of control systems was a result of each machine being built as a stand-alone unit with its own controls rather than being programmed to work within a larger system.  AMT had the formidable job of getting all the individual systems to communicate with each other, run in sequence, and work together to produce the product. No simple task, AMT engineers had to make changes to the code in much of the equipment, which was written and commented in a different language. AMT staff worked long hours, staying at the plant late each night on calls with equipment provider’s engineering team learning how the equipment was programmed and strategizing on how to get the discrete pieces to work as a system.

AMT engineers used produce-consume tags, a way of getting modern PLCs to talk to one another. For some of the older equipment, engineers used explicit messaging to enable communication, allowing the discrete equipment in this cell to work together as it was intended. The master PLC (CompactGuard Logix Safety PLC) was added as the central communication hub that all the auxiliary equipment communication works through, in effect, a “traffic cop.”

The robots, hot press, forming drum, and smaller equipment talk to each other through the master PLC, which then relays the messages and responses back to the devices. For example, if the robot wants to set a rack of bowls on the hot press, the robot messages the master PLC, which checks the status of the hot press, communicates with it, and responds back to the robot. All possible communication scenarios were programmed into the system and required extensive testing and debugging to ensure that the correct bits were turning off and on for both sides so the process could function properly.

With the rise of the Industrial Internet of Things (IIoT) and Industry 4.0 technology, the ability now exists to monitor production and take advantage of predictive maintenance from anywhere in the world rather than only from the plant floor. To take advantage of this new functionality, the client’s IT group had pre-planned a network and assigned IP addresses to allow the equipment to communicate. Unfortunately, the original robotic cells were delivered with robots not having sophisticated enough networking capabilities to properly communicate in the pre-designed network topology. Because AMT’s engineers have broad experience in industrial controls and networks, AMT’s field team proposed multiple network solutions to the client’s corporate team to choose from, allowing progress to continue.

When starting this project, AMT engineers immediately recognized that integrating the safety functionality had not been considered when the discrete machines were designed. The biggest challenge in adding safety functionality to the system is that most of the devices were not safety rated. Although e-stops, safety doors, safety gates, and other equipment were present in the cell, these items were not in zones but instead came directly to the safety PLC; the system could not differentiate which devices they controlled because of the non-safety PLCs in the cell. The hot press, forming drum, and additional equipment had not been pre-engineered to allow the system to differentiate them, so opening any safety door or gate necessitated shutting down all of the equipment in the cell. Powering down the entire cell would greatly reduce productivity, so a better solution had to be found.

Safety relays were added to segment the system for extra flexibility so the PLC could differentiate the various auxiliary machines. This allowed the team to define which processes could stay running depending on which safety gate is opened, greatly improving productivity.

In addition to the automation control system issues, AMT’s controls 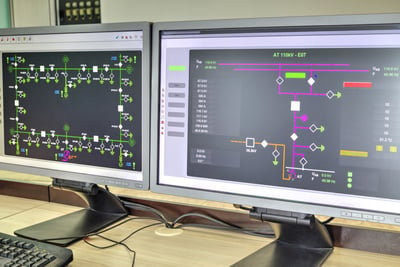 engineers consulted with the client on several process-related issues. The pulp delivery system was having trouble regulating the flow and delivering the proper concentration of slurry to the repulping area where it was diluted. This was a critical function, as the slurry needed a precise ratio of pulp and water when it is introduced to the robotic cell for production. AMT’s AJ Kahler, a controls engineer experienced in process control and fluid dynamics, consulted with the plant’s head process engineer on controlling PID loops and regulating pump speeds to design the solution. The recommendation was for the plant to add in a modulating analog control valve that could be electronically controlled, which metered down the flow and allowed more accurate control of the pump output.

Applied Manufacturing Technologies engineers, along with our client’s team members were intimately involved in the reprogramming of the original equipment to get the discrete machines to work together as an automated production system, and they are also involved in recommending changes to the client as well as the OEMs for equipment that has not yet been built. Throughout the process of getting the first robotic cells networked and running safely, AMT has become a trusted partner, setting standards for both future robotic cells as well as assisting with other process issues as they have arisen.

The teams jointly recommended that the plant standardize with a single brand, Rockwell Automation Allen Bradley ControlLogix, controls due to the ease of supporting the PLCs, servo drives, and overall plant familiarity. The client will also use FANUC America robots for the cells going forward, giving the plant a cohesive and easily-supportable base of installed equipment. Regarding safety, future modifications to the original cell design such as running the entire cell off one safety-rated PLC will allow even more granularity and flexibility in the system.

A trusted partner to the client, AMT continues working to bring this new facility to full production capacity. The diversity in the experience of the controls staff at AMT, such as having process control experience, allowed the company to succeed when stepping into this situation with so many unknowns. Many controls engineers excel because they spend the entirety of their careers working on the same type of equipment. AMT’s controls engineers take that a step further by truly understanding the theory behind controls, allowing them to succeed in any environment.

Engineering Manager and technical lead for the project, AJ Kahler, summarized the experience. “Our field team did a really great job with all the uncertainties and moving parts of this project. I think this speaks to the high caliber of engineers working at Applied Manufacturing Technologies. You have to be a pretty sharp controls engineer to be able to step into a situation like this and come out at the end of the day with the customer favoring you.”

With more than three decades of successful automation projects under our belt, we are sharing...
Read More