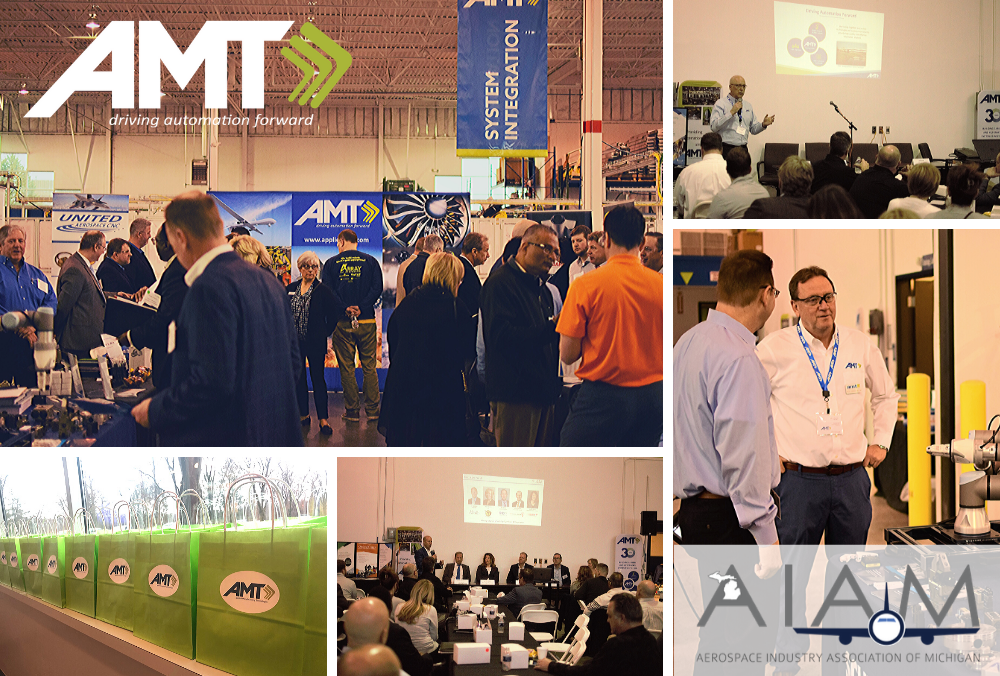 Thank you to those who attended the aerospace industry informational luncheon at our facility last week. We would also like to thank AIAM, Oakland County, the East Grand Rapids Middle School robotics team, and the exhibitors for helping to make this a successful event.

On March 13, 2020, AMT hosted an informational luncheon in conjunction with the Aerospace Industry Association of Michigan (AIAM) and sponsored by Oakland County. Attendees networked and learned from aerospace industry experts who shared experience and expertise on innovation opportunities to increase output and speed to market with fewer resources. More than 100 people attended the event which featured exhibits, presentations, and discussions on the latest automation technologies used in the aerospace manufacturing industry.

During the event, East Grand Rapids Middle School’s entire FIRST Robotics team was present, including students, advisors, and mentors. The students showcased their current robot, technical display boards, and a video they produced, all of which impressed conference attendees. “We were thrilled to host the East Grand Rapids Middle School Robotics team at our luncheon,” said AMT President Mike Jacobs. “This team is very inspiring; they have worked hard and had a successful season, earning a spot at the national competition, FIRST Championship 2020.”

After networking and browsing the exhibits, attendees were served lunch and listened to presentations by local industry leaders. AIAM president Tony Vernaci acted as emcee and gave opening remarks. AMT Founder and President Mike Jacobs offered a welcome to the group, and was followed by AMT Senior Project Manager Kelly Chalmers, who discussed collaborative automation in today’s workplace. Next up was the accomplished group of Grand Rapids robotics students who gave a presentation overview of their work, which ended with a Q&A session.

The final presentation of the event was a five-person executive panel entitled “Sharing a Range of Industry Experience and Perspectives,” which was staffed by Joe Gustavus, Principal at Miller Canfield, Heidi Devroy, CEO of Prosper-Tech Machine & Tool, Jeff Simek, GM of RCO Aerospace, Jason Fahlbush, Principal and Founder of RedBeacon Advisors, and Jennifer Paugh, President of MIAT College of Technology. The group discussed current topics affecting the aerospace industry, such as finding skilled labor and working within federal regulations.

After the presentations concluded, AMT opened up the manufacturing floor so that visitors could peruse AMT’s automation systems in various stages of completion. FANUC America offered two interesting collaborative robot demos, featuring a robot that can be hand-taught, and another that allowed interactive tasks to be assigned to it.

“We appreciate that folks were willing to drive hundreds of miles to attend this luncheon and open house,” said Mike Jacobs. “We are proud to be a part of the Michigan aerospace manufacturing community, and happy to support events such as these that promote partnerships and strengthen the local economy.”

Tags: aerospace, AIAM
Back to Blog

Have the travel restrictions stalled your equipment installation? During the COVID pandemic,...
Read More